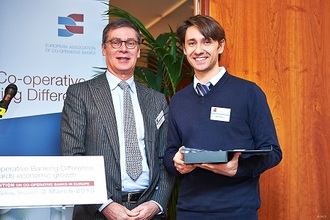 The scientific committee of the third EACB award for young researchers on co-operative banks, after careful selection and according to the criteria established in the Call for Papers, has selected the following winner:

Davide Salvatore Mare, Co-operative Banks: 'What Do We Know About Competition, Risk Preferences and Market Structure?'

Mitja Stefancic received his prize during the 6th Convention on Co-operative Banks held in Brussels on 3rd March 2015.