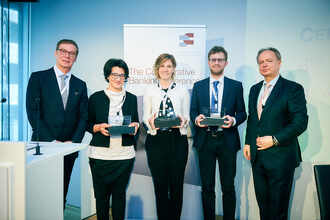 The scientific committee of the fith EACB award for young researchers on co-operative banks, after careful selection and according to the criteria established in the Call for Papers, has selected the following winners:

Ulrich HASKAMP, Spillovers of Banking Regulation: The Effect of the German Bank Levy on the Lending Rates of Regional Banks and their Local Competitors.

Ivana Catturani and Erika Dalpiaz received their prize during the EACB Convention on Co-operative Banks held in Brussels on the 28th of March 2017.