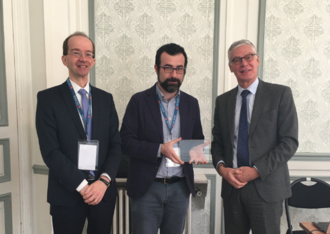 The scientific committee of the seventh EACB award for young researchers on co-operative banks, after careful selection and according to the criteria established in the Call for Papers, has selected the following winners:

Pierluigi Murro and Valentina Peruzzi received their price on the occasion of the EACB Think tank on co-operative banking meeting held on the 20th of November in Paris.