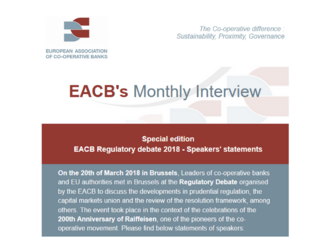 On the 20th of March 2018 in Brussels, Leaders of co-operative banks and EU authorities met in Brussels at the Regulatory Debate organised by the EACB to discuss the developments in prudential regulation, the capital markets union and the review of the resolution framework, among others. The event took place in the context of the celebrations of the 200th Anniversary of Raiffeisen, one of the pioneers of the co-operative movement. Please find below statements of speakers:

Peter Simon, Member of the ECON, European Parliament
"Co-operative banks are crucial for the financing of the real economy in the European Union. Especially small and medium enterprises and regular consumers are customers of co-operative banks that manage their assets and provide credit. In order to preserve the diversity of the banking market in Europe and allow small banks to be competitive, we therefore need tailor-made regulatory requirements that are suitable for small and low-risk banks and their business models."

Alban Aucoin, CEO, Fédération Nationale du Crédit Agricole
"I have a dream… that the wave of regulation comes to an end and that the cooperative specificities are finally taken into consideration by the European regulators and supervisors.
There are too many layers of regulation, without taking into consideration the cumulative impact of different reforms. Harmonisation has become a goal per se without taking into account the fact that the diversity of the banking models is a strength, both in terms of risk and customer offering.
We need more consistency. We need more consideration. The cooperative model has indeed proved its resilience. Governance is the cornerstone of cooperative banks. However, in the guidelines published on 26 September 2017 by the EBA/ESMA relating to the internal governance and the assessment of the suitability of members of the management body and key function holders, many provisions are incompatible with the features of the cooperative bank model. In addition, we believe that the existing solidarity mechanisms already play an insurance role which is wider than the loss absorption that could be provided by internal MREL/TLAC. Thus, no internal MREL should be required for institutions within the scope of the network of affiliated cooperative banks. So, my dream is that cooperative banks be able to continue financing the real economy and not be hindered by excessive and inappropriate regulation."

Roberto Di Salvo, Vice General Director, Federcasse
"Recovery and Resolution framework is far from being properly tailored for less significant and small and medium sized cooperative banks. Indeed, proportionality has fully been neglected at this respect. On the one hand, recovery actions may be ineffective or not feasible at the small bank level (limitations on cost cutting or assets and branch selling, complexity of merging for cooperatives). On the other hand, the public interest is unlikely to be met by non systemic bank and Resolution cannot be triggered. Therefore, insolvency procedures turn out to be the “very likely” solution left with a small or medium sized cooperative bank under distress. If cooperative banks are not part of a consolidated group, early interventions and alternative measures by IPSs and DGSs should be fostered in order to compensate for this lack of policy making."

Johannes Rehulka, Managing Director, Fachverband der Raiffeisenbanken
"Cooperative banks will not change their business model due to regulatory provisions. They will always grant loans and take deposits in their region. That is their simple business model. However authorities and regulators have to take care not to overload small cooperative banks with administrative burdens. Otherwise the number of small cooperative banks will further decrease. A scenario in which rural regions are loosing attractiveness and in which enterprises and the population especially in remote regions loose their financial partner."

Erkki Sarsa, Head of Public Affairs, OP Financial Group
"At least from the perspective of the Finnish financial market it is easy to answer to the question, as to how the recent massive increase or financial regulation has shaped the co-operative bank sector. In Finland the structure of the banking system has changed significantly during the last few years. A main driver for this restructuring has been the ever-increasing regulatory burden, which has forced all of the 80 or so remaining independent local banks to give up their status as independent banks and formed groups consisting of a central institution and local banks affiliated to it within the meaning of Art 10 of CRR. Today there are three such groups, representing almost half of the Finnish
banking sector, which are subject to prudential requirements only at the consolidated level and in many respects operate in the market as a single entity.
Another striking example of the effects of the recent regulatory flood has been the amount of large IT projects driven only by regulation. Today three quarters of all critical IT development projects in banks can be such regulation-driven projects, which consume all available resources that could be used to meet the challenges of the rapid market developments.This is worrying particularly in the current situation, where the banks need to rapidly react to the disruptive competition from both the global technology giants and small, agile fintech companies"

Franky Depickere, President, International Raiffeisen Union & CEO, Cera
“What one person cannot achieve is achieved by many”. While it may be not obvious, behind this statement are a man and an idea that have changed the world. The impact and ideas of Friedrich Wilhelm Raiffeisen are more topical than ever. More than one billion people worldwide are now members in a cooperative. Together they make up a backbone of society, undertake and create prosperity and well-being. A great idea deserves to be developed and reintroduced again and again. This EACB celebration and the jubilee year offer us a unique opportunity: we can all point out without false modesty that cooperatives and cooperative banks are economically successful, social, democratic, modern and inspiring. Let us write together the following chapters with great enthusiasm in the spirit of Raiffeisen."