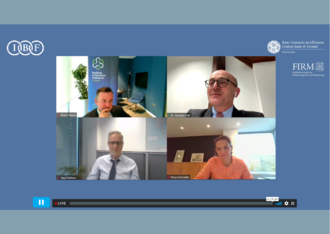 In line with the objectives of co-operative banks which is to promote the social, environmental and economic wellbeing of the communities they belong to, Ms. Schindler’s contribution took the retail perspective. Taking part in the panel discussion on “Efficient Ways Towards a True Green Capital Markets Union”, she elaborated on the efforts of co-operative banks to foster clients’ green investments.

EACB members consider that, for the Capital Markets Union to generate retail investor involvement in the green transition, the legal framework should allow financial institutions to be clear on what is green, what is not green or what is on the way to green. While a lot of good work has been undertaken by regulators, supervisors and financial institutions alike, there is still important room for improvement. EACB members are concerned with the need for regulators to address the outstanding sequencing issues and timing inconsistencies that exist between various legal texts such as the MIFID delegated acts, SFDR, and to align definitions and, product classifications between the SFDR, taxonomy and the various ecolabels that are under development. Ms. Schindler stated: “Clients will have high expectations from such classifications and labels, so we need to get it right if we want to take major steps forward in getting the retail investor involved in the transition towards a greener economy.”

When asked about the risk of Europen running ahead and the US overtaking Europe in the standard setting process, Ms. Schindler stressed the importance of global action on climate change and commented that “it will be interesting to see how global standardisation will pan out in the context of the International Sustainability Standards Board (ISSB), the creation of which was announced earlier last week at the  UN's COP26 global climate summit in Glasgow, with Europe already having moved ahead with its own requirements.”