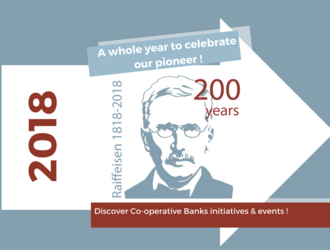 What do we celebrate ?

Raiffeisen's founding idea: "we can achieve more together than alone".

Who was Friedrich Wilhem Raiffeisen ?

Friedrich Wilhelm Raiffeisen was one of the founding fathers of the co-operative movement in general and more specifically of co-operative banking. He was born in 1818 in Germany. He was the son of Gottfried Friedrich Raiffeisen, a farmer and a mayor. After a brief career in the military, Friedrich Raiffeisen became mayor himself at the early age of 27, an office he would carry out for the next 20 years in several municipalities in the Rhineland region. He died in 1888 at the age of 69. Raiffeisen conceived of the idea of co-operative during his tenure as the young mayor. He was inspired by observing the suffering of the farmers who were often in the grip of loansharks. He founded the first co-operative lending bank in 1864. In order to secure the liquidity equalisation between the small credit banks, in 1872 Raiffeisen created the first rural central bank, the “Rheinische Landwirtschaftliche Genossenschaftsbank” (Rhenish Agricultural Cooperative Bank).

Friedrich Wilhelm Raiffeisen. The Power of an Idea from IRU on Vimeo.

What is co-operative banking ?

Co-operatives banks have very specific values: solidarity, self-help, fighting against exclusion, social and environmental concerns, resilience, proximity, trust and governance. These values are embedded in the ways co-operatives do banking, explaining their strong commitment to societal responsibility. Discover our key values on our dedicated webpage.

To lear more on the co-operative banking different models, check our webpage on "Models of groups and networks"

What will be the initiatives taken by co-operatives banks during this year ?

Please find below a table gathering all the initiatives undertaken by the EACB members and partners to celebrate the bicentennial. This table will be updated regularly. The EACB will also organise a celebrative cocktail "Celebrating the Raiffeisen idea: the distinctive features of co-operative banks today and tomorrow” on the occasion of the Regularoty debate on the 20th of March in Brussels. During this event, top co-operative banks leaders, EU Institutions and international organisations will highlight the roots and the values of co-operative banking. Please be ionformed that the event is on invitation only.