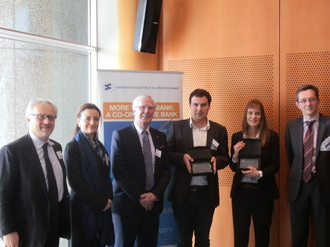 Half of all existing banks in Europe belong to the decentralised network of co-operative banks while their market share in the enlarged EU is about 20%. In some countries, the market share on deposits lies well above this figure, as is the case in Austria, Germany, Finland, France, Italy and the Netherlands. However, the co-operative banking model is under-represented in mainstream research.

The EACB received a large number of applications from a number of different countries and on a broad array of subjects related to co-operative banks, such as the relationship between co-operative finance and the ‘traditional’ banking sector, the relevance of soft information in assessing credit risk and the analysis of the unique co -operative banking governance model.

The scientific committee of the EACB award for young researchers on co-operative banks, after careful selection and according to the criteria established in the Call for Papers, has selected the following winners, first prize ex-aequo:

1-Anaïs Périlleux: “Is co-operative finance a solution to banking marker failure? The complex relationship between financial cooperatives and the traditional banking sector.”

The laureates were awarded the prizes during the Third Academics and Stakeholders' Day held in Brussels on 1st April 2014. For further information about this competition for Young Rsearchers on Co-operative Banks, please check the related Call for Papers.

Marie-Claude Beaudin: "The purpose of credit unions: An antecedent to organizational attractiveness"

Verena Klappstein: "Goodbye freedom of contract: Are German co-operative banks subject to an obligation to contract?"

Andrea Minto: "Why has to be different internal control system in co-operative banks?"