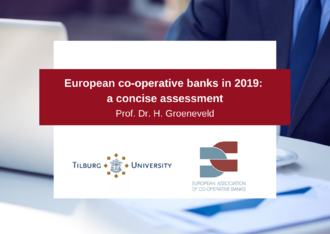 Prof. dr. Hans Groeneveld is Professor of Cooperative Financial Services. He studied quantitative macroeconomics at the Erasmus University Rotterdam and a PhD in the monetary economy at the University of Maastricht. His professional career began at the CPB in the department Labour and Social Security. He then worked for over ten years at De Nederlandsche Bank in the monetary respectively supervision directorate. Currently he is also Associate Director Cooperative & Control at Rabobank. There he is involved in strategic and organizational projects. He represents Rabobank in many networks in the national and international cooperative world. Previously, he held various senior and management positions at Rabobank. He was Senior Consultant Corporate Strategy, Dep. Chief Economist, Head of SME Sector Management and Director of International Services.

Prof. dr. Groeneveld is a board member of the International Raiffeisen Union in Germany, president of the think tank of the European Cooperative Banks in Brussels, member of the Scientific Committee of the European Research Institute on Cooperative and Social Enterprises in Italy, and the Co-operative Business Education Consortium in Canada. He has published extensively on monetary policy, banking, cooperative banks and strategic and organizational issues in academic and policy journals.