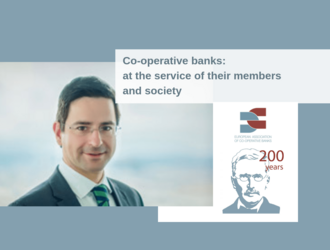 The first credit co-operative in the territory of today's Austria was founded in 1886 in a small village not far from Vienna. From then onwards, numerous more came into existence and proved valuable institutions to support socially acceptable structural change in rural regions all over the former Habsburg Empire.

In order to strengthen the Raiffeisen sector, its first central banks at provincial level – today’s Raiffeisen Regional Banks – were founded in the 1890s. However, the position of Raiffeisen within the total Austrian credit sector remained relatively modest.

The economic damage inflicted by World War I, the collapse of the Austro-Hungarian Monarchy in 1918, and the following hyperinflation necessitated a reconstruction of the organisation. With the establishment of the later RZB – todays Raiffeisen Bank International (RBI) – a nation-wide central institute for the co-operative credit business became reality in 1927. Thus the three-tier development of the Austrian Raiffeisen Banking Group (RBG), consisting of locally active Raiffeisensbanks, Raiffeisen Regional Banks and one nation-wide central institute, had been completed.

Between 1938 and 1945, during the time of the German occupation, the Austrian Raiffeisen organisation lost its independence, but after World War II and a modest new beginning, RBG managed to turn itself into a powerful universal banking system, became efficient provider of financial services in rural areas and also proved to be able to penetrate urban centres.

Currently, RBG consists of more than 400 local banks, 8 Regional Banks and RBI. With around 2,000 outlets in total, it has the best developed network of bank branches in Austria. 4 Million people – almost 50 percent of all Austrians – are customers, so that RBG is Austria’s largest banking group with consolidated total assets of about €280 billion. The name Raiffeisen and the gable cross symbol that represents the organisation in Austria, is one of the country’s best known brands.
In addition to its significant role in its home market, Raiffeisen Austria is characterized by its economic commitment in CEE. In 1918 the collapse of the monarchy led to a disintegration of the former central European network of Raiffeisen co-operatives. But as early as 1986 – that was well before the fall of the Iron Curtain – new activities of former RZB, todays RBI in central Europe were resumed with the founding of a subsidiary in Budapest. Thus, Raiffeisen Austria played a pioneering role in preparing economic co-operation with CEE countries, helping their transformation into market economies at the end of the socialist era. RZB/RBI was the first western banking group to succeed, within a short period of time, in establishing a dense network of commercial banks in the reform countries. By doing so RZB/RBI managed to position itself as one of the leading banking groups in central and eastern Europe. Today RBI Group employs more than 50,000 people in CEE and operates a dense network of more than 2,400 branches with 16.5 million clients throughout the region. On account of these activities, Raiffeisen Austria accompanied the economic transformation in central and eastern Europe from the very beginning.

The Austrian Raiffeisen Banking Group combines basic principles from its early history – self-help, self-administration and self-reliance – with modern banking know-how. Down to this day and true to these principles, Austrian Raiffeisen Banks are characterised by features like customer orientation, local integration, social commitment and solidarity within the group, combined with the strength of a large and modern financial services provider. Today as yesterday, the first aim is to increase the market power of its co-operative’s members and to improve their economic position.

However, this applies to the financial sector as well as to all others in which the around 1,500 Austrian Raiffeisen co-operatives operate: Raiffeisen in Austria, besides banking, stands for innovative and ecological agriculture as well as for strengthening the middle-class economy. For industrial holdings to secure domestic jobs as well as for modern media. For international engagement as well as local patriotism and solidarity.

The Austrian Raiffeisen Banking Group has preserved its historically grown three-tier structure until today: just over 400 local and independent Raiffeisen banks are owned by 1.6 million members. Around 5,000 elected and voluntary officials represent the members interests towards the employed management. All local Raiffeisen banks together jointly own the respective Raiffeisen Regional Bank in their federal state. And these 8 Regional Banks together are with a collective stake of about 59 per cent the principal shareholders of RBG’s central institution – the listed Raiffeisen Bank International.

Solidarity within this group makes close co-operation for the benefit and the security of Raiffeisen customers possible. Due to certain liability agreements, deposits in the Raiffeisen Banking Group are secured up to 100 per cent and therefore far beyond the minimum levels prescribed by Austrian law.

In times of growing anonymization and globalization, today's people are increasingly looking for traditional values such as personal responsibility, solidarity and regionalism – expectations, which would be well covered in small-scale co-operative banks. But while especially these are struggling with increasing and often disproportionate regulatory pressures, with the challenges of digitization, and not least with a somewhat old-fashioned image, many of their potential customers are turning to new trends such as sharing economy or digital crowdfunding platforms.

Against this background Raiffeisen Austria celebrates the jubilee year on the 200th anniversary of its name – and idea – provider Friedrich Wilhelm Raiffeisen under the motto: ‘Raiffeisen - The Power of Idea’. Be aware: co-operatives have a bright future, because co-operative values are gaining in importance again. But also in the knowledge: co-operatives not only have to communicate these values, they also have to live them – what requires a daily check in practice.

For decades the organisational structure of RBG – with its voluntary and enhanced co-operation at all levels – made it possible to combine the strength and potential synergies of a large financial institute with the proximity to its customers and the flexibility characteristic of small, community based co-operatives.
Both the constant adaptation of this structure and the strong rooting in the co-operative DNA will remain RBGs unique selling point. Also tomorrow.