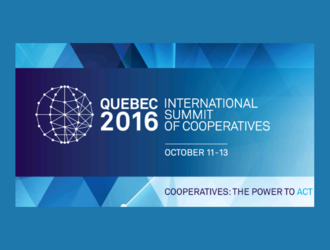 The European Association of Co-operative Banks took part at the International Summit of Cooperatives 2016 (ISCOOP) in Québec City last October. In this context, Co-operatives showed their power to act on the United Nation's Sustainable Development Goals. Sustainability is one of the core value of Co-operative Banks. Discover below the statement launched this 21st of December by the ISCOOP.

At the second International Summit of Cooperatives in 2014, the cooperative and mutual movement set for itself the objective of demonstrating the capacity of cooperatives to innovate and adapt. Summit participants concurred on the goal of promoting the emergence of more cooperatives and strengthening existing ones. The aim was to encourage cooperatives to work together to ensure food security, to pursue their role as creators of wealth and employment, to intensify their actions to promote access to healthcare and financial services for all people, and to continue supporting sustainable development.

In 2016, cooperative enterprises gathered once again in Quebec City, this time to focus on cooperatives’ capacity to act on social, environmental and economic issues. In response to the UN’s Sustainable Development Goals (SDGs), cooperatives and mutuals recognize that they are in a position of influence in terms of being able to introduce sustainable development strategies and help resolve major world issues.'