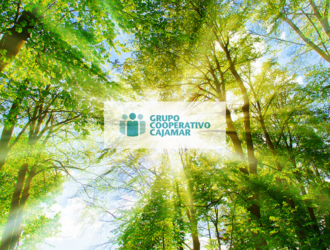 Last October, the Carbon Disclosure Project (CDP) awarded the "B" rating to the Grupo Cooperativo Cajamar for the measure and management of its carbon footprint. The CDP is an independent non-profit organization that maintains the world's largest database of corporate information on climate change. In particular, it analyzes the evolution of the largest companies by capitalizing on carbon emissions management and their fight against climate change. The indicator measures both transparency and performance in the management of greenhouse gas emissions.

In 2014, the Grupo Cooperativo Cajamar submitted for the first time to the CDP analysis and obtained a "C" performance rating. The effort made by the Entity in terms of transparency and management of its carbon footprint throughout 2015 has allowed it to achieve an excellent rating. In fact, practically 100% of the electricity consumed by the Grupo Cooperativo Cajamar comes from renewable sources, so that, in terms of electricity consumption, the Entity is emission neutral. In addition, considerable efforts are being made to minimize the escape of gases from air conditioners, which also contribute significantly to global warming. Emissions from employee travel have also been significantly reduced by the rationalization of travel and the use of videoconferencing.

Find more on the BCC Cajamar sustainable initiatives on their website !