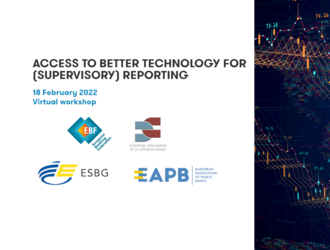 On 18 February 2022, the four European banking associations (EACB, EAPB, EBF and ESBG) cohosted the “Access to better technology for (Supervisory) Reporting” workshop that brought together the entire European banking industry, the European Banking Authority and the international RegTech community to openly exchange views and learn from each other on how RegTech solutions could help banks reduce their reporting costs and what are the hurdles to clear along the way. 300 participants across Europe participated in this half-day, targeted workshop.

The presentations delivered by the banking industry clearly revealed the many challenges and complexities the industry has been facing for about 15 years due to the flood of additional data reporting requirements to banks. Data has never been as important as it is now with regulatory reporting having shifted from a simple administrative task in the past to a strategic objective high in the agenda of banks and a steering tool, with supervisors placing increasing focus on data quality. The current situation is the result of a layering of successive regulations, by different authorities at national and EU level, with the added complexities of different definitions and shorter delivery times demanding substantial investment by banks in systems, processes, and specialized staff. Banks have been mastering these challenges very well, generally speaking, but there is always room to become even more efficient.

While there are existing cases where banks are already benefitting from the use of technology either from in-house solutions or by creating a shared utility as result of a joint venture or other forms of pooling of resources by a number of banking groups in a country, the discussion revealed there is still ample room to explore and lot of work ahead to benefit from technology at a large scale.

A dedicated panel composed by RegTechs based across Europe confirmed that technology is available or is being developed to support banks with a wide range of services offering from end-to-end to targeted solutions. RegTechs also confirmed complexity is the most challenging aspect in the current reporting environment identifying standardization, infrastructure, and automation as tools to decrease the complexity.

The different ways regulatory reporting is done in Europe also adds complexity. Creating a more functional and interconnected ecosystem is key to start moving towards a much-needed standardization where RegTechs can play a key role. Replying to questions raised by the banking industry, RegTechs stressed that technology should be seen as innovation that could help banks reach beyond the 15-24% cost reduction as estimated by an EBA study last year, rather than a black box that brings its own complexity. RegTechs are also trying to remove barriers by intensively promoting their services for which forums like the workshop organized by the trade banking associations was an ideal setting to bridge the gaps between RegTech and the banking industry.

With a forward-looking perspective, the EBA provided an overview of how the different recently launched initiatives such as the Integrated Reporting System and the Commission’s supervisory data strategy aim to shape the future of supervisory reporting. The challenge is big, but the benefits are worth. The banking industry, RegTech community and supervisory authority agreed events like the workshop are key to foster collaboration and they will stay in close contact.