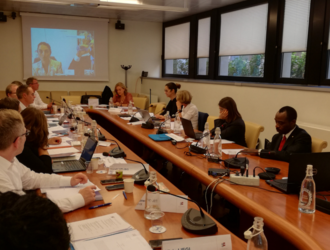 Today European Association of Co-operative Banks members of the Consumer Policy Working Group gather in the eternal city of Rome to discuss some of the key pieces of legislation that are currently undergoing an evaluation or a review from the Commission.

In particular, members had the opportunity to exchange views with Commission officials on the Consumer Credit Directive (CCD) and the Mortgage Credit Directive (MCD), which also triggered the discussion on the EBA’s work on the draft Guidelines on loan origination and monitoring.

With regard to the latter, the consultation for which has been recently concluded, members took the opportunity to once again raise their concerns on the timing of the EBA Guidelines.

While acknowledging that the European Council mandated the EBA to outline the supervisory guidance on loan origination and monitoring, we see a number of critical aspects in the approach drafted in the draft EBA Guidelines. To begin with, we are concerned that the EBA’s proposed Guidelines go beyond what is required by the relevant level 1 legislation and that the EBA oversteps its mandate in doing so by defining an entirely new framework outside the legislative process.

It is also problematic that the EBA issues such Guidelines while the assessment of the CCD launched by the European Commission is still ongoing and before the publication of the outcome of such assessment. If the two initiatives follow their respective courses each in their own timeline – the two initiatives will lead to two sets of changes to be introduced in banks’ processes and IT systems in a relatively short timeframe.

EACB members also re-affirm that the draft EBA Guidelines should only apply to those credits which fall under the scope of the current level 1 Directives (i.e. CCD and MCD). The requirements provided for in the proposed EBA Guidelines, and in particular those in Annex 2, go beyond the applicable Directives and are too prescriptive. The EACB thus calls on the EBA not to pursue the idea of Guidelines for unsecure lending until the outcome and timeline of the Commission’s work on level 1 are clear. A similar comment can be made regarding the MCD review, which has also started.