EACB Executive committee end of the year meeting in Brussels 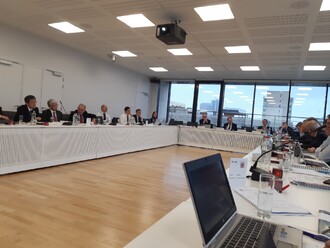 Friday, 13th December2019 – The Executive Committee of the European Association of Co-operative Banks (EACB) has met today for its end of the year meeting. About 30 co-operative banks leaders have gathered in Brussels. Work have focussed on the banking regulatory framework at EU and international level, resolution, accounting and taxation, corporate governance, retail and financial markets activities and the EU sustainable finance initiatives.

Gerhard Hofmann, EACB President, stated: “Co-operative banks would like to reaffirm their wish to continue the dialogue with European institutions in a regulatory context that could impact the diversity of banking business models, because diversity is a strength for financing the European economy.”

The members of the EACB are concerned about the implementation of Basel reforms, which according to the assessment of the EBA will result in a massive capital increase for EU banks (+23.6% on aggregate). The EACB members highlighted that the mandate of the G20 and the resolution of the European Parliament called to result “in no significant increase in overall capital requirements”. The results instead appear as massive capital increases in capital requirements in Europe across the board. The members of the EACB believe that capital levels need to be reasonably set and any gold-plating has to be avoided in order to maintain a stable flow of capital to the real economy. Only a sensitive calibration of capital requirements would ensure a global level playing field with overseas competitors. Moreover, efforts are necessary to keep methodologies and processes sufficiently simple for smaller banks in order to avoid a too heavy regulatory burden. The EACB members finally recall that the transition to a carbon-neutral economy requires an important contribution from the banking sector and a severe increase of capital requirement could rather hamper banks’ efforts in this respect

On Sustainable Finance the Executive Committee Members underlined their commitment to the new Green finance strategy announced as part of the Green Deal unveiled on 11th December. The Taxonomy Regulation was intensively discussed by the Members as the EU co-legislators could be finalising the package before the end of the year. EACB Members recognise the need to finalise this missing piece that is the foundation for all other EU Action Plan measures. However, while co-operative banks support the new dynamic approach with the inclusion of transition activities and different shades of green, they regret the fact that final negotiations may lead to a too complex and bureaucratic regime compared to the simple framework necessary to accelerate the shift to sustainability. The EACB Executive Committee also debated the challenges ahead for the industry in the implementation the Regulation on Disclosures relating to Sustainable Investments pending the detailing of the implementing rules. Other topics on the agenda included the EU ecolabels, EU Green Bond Standards, the EACB work on climate-related disclosure and the new ESG (climate) risk expert group recently set-up.

Moreover, we urge to reconsider the substance of the set of new Guidelines on loan origination and monitoring. The approach taken by the EBA in the draft is overly prescriptive, detailed and burdensome. The granularity of requirements results in a complete overhaul of how banks have to grant loans resulting in Guidelines that can be assimilated to a Basel IV for retail banking. We expect vast impacts: the new rules would fully change the overall framework of how retail lending activities must be performed and overrule the acquired set of practices. The new framework will require huge IT investments and a reconsideration of the relationship with the customers, while raising considerable doubts in terms of efficiency. The approach taken hardly seems to fit with the nature of level 3 legislative product which is the Guidelines. Such sweeping changes should only be the result of a level 1 legislative process. Overall, the challenges posed by the EBA loan origination GL are extremely important for the entire sector.

During the meeting, the Executive Committee members have nominated as new Vice-President Mr Berry Marttin, Member of the Managing Board of Rabobank.