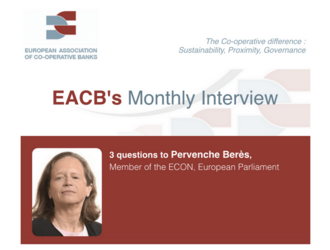 Dear Ms Berès, as member of the ECON and co-rapporteur of the EP draft Report on the ESAs review, how do you see the role of ESAs developing in the future and how this review will help shaping it?

The European Supervisory Authorities (ESAs) were born in the aftermath of the financial crisis in 2009, and undoubtedly they have done a lot of hard work, contributing to a more coherent supervision of the EU financial system and better coordination between national supervisory authorities, but also by providing technical expertise in the process of law making in the area of financial services. This was not an easy task. It is true that the ESAs work is highly challenging and complex and they have delivered significant achievements. But of course, it is not all perfect: there are things that can be organised in better and more efficient manner or clarified in their responsibilities. This is what the Commission proposals aim at, and we as European Parliament will try to ensure that this is done right covering all areas, that is (1) mandates, (2) governance and (3) funding of the ESAs. Already in December 2015, the Parliament adopted a resolution making recommendations in relation to the coherence, consistency, complexity, proportionality and the overall effects of the existing regulation and supervision, including the revision of the ESA regulations, the ESA standard-setting and the ESA involvement in the procedures of law making in the area of financial services. There are some fundamental questions to be answered in this context: Which path should the ESAs go in terms of supervisory versus regulatory powers? Is it possible to upgrade the governance of the ESAs to allow a stronger use of their powers? Following the adoption of level 1 legislation, can we increase the convergence of enforcement?
Having said that, the main driver from the very inception has always been to contribute to the achievement of the single market. It should also be kept in mind that this revision is also driven by the development of the Banking Union legislation, in particular the creation and practical implementation of the Single Supervisory Mechanism and the Single Resolution Mechanism (SSM and SRM) and the build-up of a Capital Markets Union that have further changed the regulatory and supervisory landscape in the recent years. And on top of that, we are seeing new opportunities and challenges when it comes to FinTech and also a strong drive in sustainable finance, which need to be reflected in supervision, the ESAs mandate and law-making. The current review is the opportunity we have now to achieve these objectives while trying to find the right balance. I also believe the current situation regarding consumers and others users of financial products must be upgraded.

You recently hosted the EP Breakfast discussion: "The ESA Approach to Level 2 and 3 mandates: Flexibility or Action without mandate?". How can, in your view, be ensured that all of ESAs proposals and their supervisory convergence tools (e.g. guidelines, Q&As) are in line with the Level 1 text and do not add requirements on top of the Level 1 text?

I am aware that there have been several concerns raised by different stakeholders in particular when it comes to Technical Standards and Guidelines, and to a certain extend we understand these concerns. That is why, I also decided to host an EP breakfast event, to create another opportunity to discuss this point and what could be done in that regard.
The idea has always been that level-2 and level-3 measures should be based and abide to level-1 text- where their mandate derives from. The European Parliament is already involved in the scrutiny of the Regulatory Technical Standards (RTS_ developed by the European supervisory authorities) and has rejected such standards where it saw the need to do so. And trust me, proper scrutiny of the technical standards is already much work, considering all other European Parliament responsibilities and tasks. What, together with co-rapporteur MEP Balz, I consider would be a good practice when it comes to RTS is to require that Members of the Board responsible for these should not come from the National Competent Authorities, but from the Treasury- which means the same people that have drafted level one. We intend to include an amendment in that regard.
When it comes to Guidelines the European Parliament is not involved on a daily basis, but we are still monitoring. In fact we have “objected” (or raised concerns towards) to guidelines when we thought they were not going the right direction. The Commission also has an eye on the Guidelines. Moreover, the Commission proposal already provides that when 2/3 of a Stakeholder Groups (SGs) consider that the Level 3 measures (Guidelines and Recommendations) go beyond Level 2 or Level 1 they will have the possibility to address an opinion to the Commission in that regard, and if the Commission agrees it may oblige the ESA to withdraw the guideline or recommendation. I would say that this is already a good proposal to address such concerns, but will also propose that the ESA could amend its proposal.
For the Q&As I really do not see any reason why the European Parliament or Commission should be involved. Q&As are not legally binding and it is up to the national authorities to decide if they will follow them or not. Maybe the non binding statute of Q&As could be clarified in order for competent authorities not to hide behind them.

How do you think that the cooperative banking group specificities can be better reflected in the future legislative framework? Could the ESMA and EBA Stakeholder Group represent a good and efficient forum in that regard -encompassing the different pillars of the banking system- in particular when it comes to level 2 and level 3 measures ?

Both myself and co-rapporteur MEP Balz are strong supporters of the proportionality principle- taking into account business models and their specificities. This should be reflected in the regulatory framework as well as supervision. For that we would intend to introduce a new overarching article to require ESAs to always take into account the business model when they draft Technical Standards or Guidelines etc. We might even go further and introduce a Committee on Proportionality.
At the same time, indeed, ESMA and EBA Stakeholder Groups could also serve this purpose. We are currently reflecting on this with an aim to reinforce fair representation and right balance. For example, we are thinking of having 3 members representing cooperative and savings banks among the 13 members representing credit and investment institutions operating in the Union and members representing SME inside the other group.
You just need to wait a bit longer to see our draft Report be published beginning of July, but we hope that these proposals could ensure that the specificities of the different business models and market participants, including co-operative banks, are better reflected in the legislative framework.