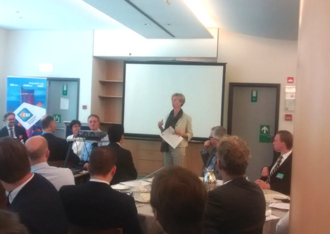 Today, Tuesday 11th of July, the EACB has co-organised an event at the European Parliament , hosted by MEP Neena Gill, on how to organize an efficient third party (TPP) interaction under PSD2.

The event is triggered by the proposal of the European Commission on 26th May to amend the existing EBA standard (February 2017), introducing mandatory “fall-back solutions” in case a dedicated interface offered by banks is not available or does not function properly. This fall-back solution proposed by the European Commission, also referred to as upgraded screenscraping, allows TPPs access to the interfaces that banks have built to manage the relationship with their customer and therewith an access to data going beyond those subject to the PSD2.This has however dangerous implications for the customers such as:

1- reduced privacy as a result of non PSD related data being made available;
2- increased chances of misuse of data and cybercrime.

The banking community is very concerned and during the debate have voiced its views which are also shared by several fintechs and by consumer organisations (fintechs and BEUC were among the speakers in the panel).

The proposed solution is to stick to largely used and secure Application Programming Interfaces (APIs) and to foresee other measures to address TPP concerns that API access does not offer sufficient performance or availability as proposed by the EBA. Despite the additional EBA requirements representing significant additional burden for banks, the members of EACB, ESBG and EBF are willing to support them as the preferred way forward to:

As highlighted by Marieke van Berkel, head of payments at the EACB in concluding the event "Imposing an upgraded screenscraping is contradicting all these objectives and should be rejected for the benefit of consumer protection, innovation and security. We urge Members of the Parliament to go along the lines proposed by EBA in its latest opinion and approach the European Commission to request the deletion of the fall-back solution."