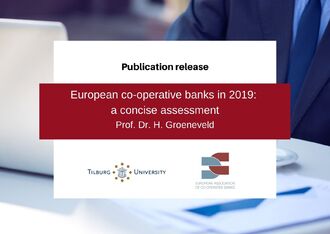 The EACB is pleased to announce the launch of a new publication entitled “European co-operative banks in 2019: a concise assessment” by Tilburg University. The publication reviews developments in the overall performance of 18 co-operative banking groups in 13 European countries. The average performance is compared to that of the entire banking sector in same countries in 2019.

The paper was released today during the presentation webinar organised by the EACB.