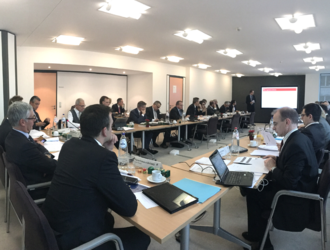 Friday, 7th December2018 – The Executive Committee of the European Association of Co-operative Banks (EACB) has met today for its 35th meeting. About 30 co-operative banks leaders have gathered at the EACB premises in Brussels. Work have focussed on the banking regulatory framework at EU and international level, resolution, corporate governance, retail and financial markets activities and the EU sustainable finance initiatives.

The Executive Committee took stock of the conclusion of the trilogue on the banking package and that a political agreement was achieved. Many provisions increase prudential requirements, contributions and administrative burden on banks. While the final drafts are not fully available yet, the members of the EACB appreciate that some positive results were achieved regarding e.g. more favourable thresholds for the SME-factor, a suitable treatment of MREL in co-operative groups [the final provisions are unknown], proportionality and remuneration, strict approaches in other areas e.g. regarding minimum MREL or liquidity waivers mitigate the overall perception of the outcome. The EACB members encourage the European Institutions to rapidly formalize the political agreement, so that banks can prepare the implementation on definite legal texts. The Executive Committee also called for a regulatory pause after en years of unprecedented flow of new legislation, and asked the legistalors to take into account the need of financing the development of the European economy.

On Sustainable Finance, the Executive Committee has discussed the work of the TEG (Technical Expert Group of the EU Commission) where EACB holds a seat and the first legislative measures on taxonomy and investors duty. Concerns have emerged on definitions, timing and the scattered process at the European Parliament where the two report, despite being closely linked, are following different paths, triggering legal uncertainty. Finally, Members agreed that the EACB would endorse the newly launched Principles for Responsible Banking (UNEP-FI), thus underlining the engagement of co-operative banks to sustainability.

EACB members discussed the pressing need to extend the timeline for implementation of the Benchmark Regulation and the vote taken by Parliament in this context. They also called for support from regulators and supervisors to create legal certainty for the migration phase when the introduction of new benchmarks as a result of the Regulation could have an impact on customer contracts.

Time was also spent analysing EACB members preparedness for facilitating access of non-bank payments service providers under PSD2 rule that kick in, in September 2018. Members reasserted their full commitment to meeting the timeline but stability in terms of expected functionalities was key to allow deadlines being met.

Once again, the EACB full support and commitment to the European project was reaffirmed, in line with the co-operative banks’ values of democracy, solidarity and diversity and their role in the European economy. Co-operative banks support actions from policy makers to ensure inclusive and sustainable growth; to reduce unemployment in Europe and to take the lead to address climate change.