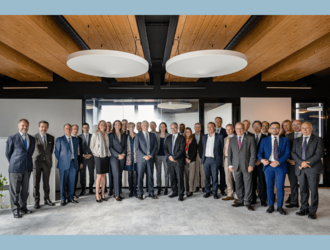 During its 45th General Assembly hosted by Conféderation Nationale du Crédit Mutuel in Paris, the European Association of Co-operative Banks (EACB) re-elected Mr Berry Marttin, Member of the Managing Board of Rabobank, and Mr. Pierre-Edouard Batard, Director General of the Conféderation Nationale du Crédit Mutuel, as President and Vice-President respectively. Mr. Daniel Quinten, Member of the Board at Bundesverband der Deutschen Volksbanken und Raiffeisenbanken (BVR) was confirmed as new Vice-President, replacing Mr. Gerhard Hofmann also from BVR who resigned due to his retirement end of February. Furthermore, the other Directors of the Board got (re-)appointed.

The General Assembly exchanged on the situation in Ukraine, its impact on EACB members and the initiatives being taken by them to support the integration of refugees coming to Europe. Special attention was also given to the upcoming revision of the Recovery and Resolution framework.

“I am delighted to be able to continue my mandate for another two years and to keep on working towards securing a business neutral regulatory framework that respects the specificities of co-operative banks and safeguards the diversity of the EU banking market. This is especially relevant in light the work to revise the recovery and resolution framework which should respect the different legal forms and group structures,” declared Mr. Marttin.

Invited as a high-level keynote speaker, Banque de France’s Deputy Governor Mr. Denis Beau addressed the current and future priorities for the European banking sector. As such, Mr Beau focused such as macroeconomic context and monetary policy developments, financial stability situation and prudential implications including the implementation of the Basel agreement, and digital transformations.

“The banking sector has proved resilient so far and has contributed to soften and not amplify shocks. Given the uncertainties about macroeconomic and macro financial outlook, it is important that banks’ capacity to absorb shocks is maintained going forward and possibly strengthened. Hence, the relevance of a timely, fair and definitive implementation of the Basel’s accord”, Mr. Beau said.