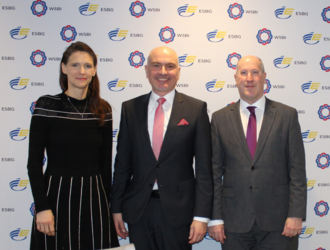 Brussels, 18 January 2023 – The European Banking Industry Committee (EBIC) announced the new composition of its Plenary. Peter Simon, Managing Director of the European Savings and Retail Banking Group (ESBG), was appointed as Chair of the EBIC for a term of two-yeas succeeding Wim Mijs, CEO of the European Banking Federation (EBF), in this function. Nina Schindler, Chief Executive Officer of the European Association of Co-operative Banks (EACB), has taken over the mandate as the EBIC’s Vice-Chair. The secretariat, which rotates along with the term of the chair, will now be in the hands of the EBF.

Nina Schindler stated: “I am delighted to take up the position of EBIC Vice-Chair and to work with the different associations united in the EBIC to align on joint positions and to take common actions on crucial topics of mutual concerns high on the EU political agenda. During my mandate, I would like to contribute to achieving a legislative framework that is conducive to creating a vibrant, diverse and competitive banking landscape capable of providing the European economy and its consumers with the products they need and want. I am looking forward to closely collaborating with my colleague, Peter Simon, EBIC Chair, and the secretariat of the EBF in doing so. ”

Established in 2004, EBIC is committed to giving the EU banking sector a common voice within the context of the Union’s legislative initiatives in finance and banking, maintaining an open and fruitful dialogue with the EU institutions and international bodies. As an advisory committee that is regularly called upon to provide expertise, EBIC is also a forum for the European banking industry’s representatives. Throughout the drafting, adoption, implementation, and enforcement process of financial legislation, EBIC ensures a representative and sound industry contribution toward better regulation across the EU.