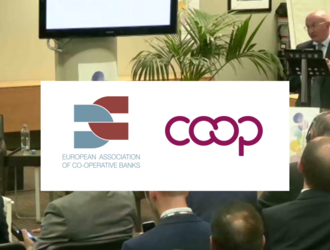 On 18 November, the official centennial event brought together the representatives of co-operative banks around the world to discuss the future of financial co-operatives. Topics such as leadership, challenges in regions and sectors (i.e. sustainability, financial literacy, digitisation), the role of CFIs today and the contribution they can make towards sustainable development of communities were discussed.

Nina Schindler, CEO of the European Association of Co-operative Banks (EACB), delivered a keynote speech on the importance of a strong voice of the co-operative banks and the recognition of their business model and specific governance structure in the EU legislative framework.

During the address, Nina Schindler underlined the mandate of the EACB to represent the cooperative banks in front of European regulators and supervisors and the role of the Association to ensure diversity in the EU Banking Sector, stating “Let me be clear: the EACB’s demands a consistent and efficient legislative framework on the European level, which reflects and respects the particularities of cooperative banks. For us diversity is key. Diversity is no luxury. It increases the stability of the banking market, and  ensures that all needs are serviced. We have seen that in Europe in the 2008 economic and financial crisis, where the economy of countries with a strong cooperative sector were less affected. And also in the current situation, characterised by important geopolitical uncertainties in the entire world, co-operative banks with their regional and member-focused approach ensure stability and confidence. That is what our people need now.”