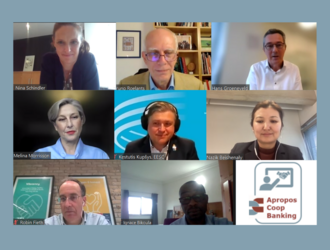 Organised in the context of the 100th International Day of Cooperatives that will be officially celebrated all around the world on the 2nd of July, it was the opportunity for co-operative banks to put in the spotlight their human-centred business model, inspired by the specific values of self-help, democracy, equality and solidarity, promoting openness and social responsibility.

The webinar was specifically dedicated to the evolving concept of the “co-operative identity”. In fact, the necessity to further examine the international “Statement on the Cooperative Identity” and what defines the co-operative values and principles is currently subject of a global debate propelled by the International Cooperative Alliance’s survey.

“The ICA ‘Statement on the Cooperative Identity’ provides the co-operative business model with a common denominator to all co-operatives in the world, based on people’s needs and on democracy. At the same time, it is sufficiently flexible to allow for a strong business innovation drive, with new types of co-operatives being constantly created.”, declared Bruno Roelants, Director General of the International Cooperative Alliance (ICA) in his keynote speech.

Nina Schindler, EACB CEO, stated: “There is no doubt that co-operative entities play a decisive role in the economy and contribute significantly to the growth and greater affluence all around the world. A tangible part in this is to the co-operative banks, particularly by providing financial support to the real economy. They are a relevant market force and a major pillar of diversity in the European banking sector. Indeed, they stand in Europe for 87 million member and 223 million customers and around 705,000 employees and have an overall market share of around 20% in retail banking.”

In his concluding remarks, Hans Groeneveld, Director International Cooperative Affairs at Rabobank and Professor at Tilburg University stated: “The co-operative identity is a multifaceted concept. At the end of the day, co-operative banks should ensure to be perceived and appreciated as a viable and attractive type of bank by members, customers, regulators, policy makers and society at large. They should – be able to – actually showcase tangible co-operative differences compared to other banks.’’