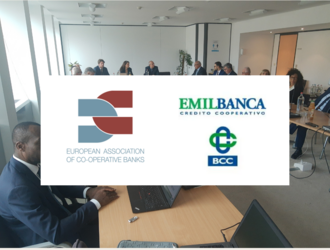 The European Association of Co-operative Banks (EACB) had the pleasure to welcome at its premises in Brussels a delegation from Emil Banca, one of the biggest Italian Co-operative Banks composed of seventeen high-level representatives of the Board of Directors, including Mr. Daniele Ravaglia, General Manager of Emil Banca and Mr. Sergio Gatti, General Director of Federcasse, the Italian Federation of Co-operative Banks. The aim of the meeting was to share opinions on the latest developments in the EU banking regulation agenda and to better address the future challenges and opportunities for co-operative banks operating at a local level.

Emil Banca is a co-operative bank operating mainly in Emilia-Romagna. It is an important local organisation with more than 53.000 members, 180.000 clients and over 10 billion EUR in total assets. The bank has always conducted itself with sustainability goals in mind, which are annually measured through the preparation of social reporting. Emil Banca is committed to systematically disseminating an internal and external culture of sustainability.

The exchanges provided the opportunity to present how the EACB represents, promotes, and defends the common interests of co-operative banks, with an eye to expanding the co-operative values across Europe and beyond. The discussions focused on topics crucial to the co-operative sphere, namely the implementation of Basel III and digital topics such as open finance.

Sergio Gatti, General Director of Federcasse, expressed “I am very delighted to witness one of the first direct exchanges between the Italian co-operative banks and the European Association after the pandemic period. It is becoming more and more evident the importance of being present in Brussels when it comes to contributing to the legislative process in the banking sector. In this view, the visit of the delegation was the perfect opportunity to increase awareness and to bring together the experiences of the different levels of the representation in the co-operative banking system in Europe, having the EACB, Federcasse and Emil Banca at the table.”

Nina Schindler, Chief Executive Officer of the EACB, expressed “It’s with great pleasure that the EACB Secretariat welcomed its long-standing Italian members with the regional delegation of Emilia Banca. This visit strengthens the close links that the Association has with others in the co-operative banking family. It re-affirms our commitment to work hand in hand in order to achieve our mission of spreading awareness and reminding policymakers that co-operative banking governance must be considered when developing legislative frameworks, especially as co-operative banking plays a role in so many local European communities.”