Press release: New impetus at the helm of Cooperatives Europe 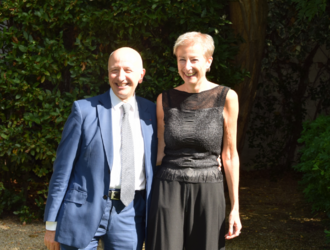 The European Association of Cooperative Banks (EACB) warmly welcomes the election of Ms Susanne Westhausen as the new President of the Cooperatives Europe during its general assembly on Friday, September 24th.

Ms Westhausen’s exceptional experience as the CEO of „Kooperationen“, Danish Cooperative Employers’ Organisation, will be instrumental in responding to the challenges that cooperatives are facing in the current time of change.

“The strong support, which Ms Westhausen could win, speaks for itself and is a testimony for her qualifications and convincing presentation as candidate. European co-operative banks are strongly committed to Cooperatives Europe and its work. On behalf of the EACB, I would like to assure Ms Westhausen our support as new president”.

“I think that we are in a period of time where the cooperative business model and the social and solidarity economy is being recognized again by local, national and super national governments and decision makers. ” Highlighting the importance of unity and inclusion, she underlined: “It must be one of our top priorities to include all members, also members outside the EU. Together we can take also national lobbying to the next level.”

The general assembly of Cooperatives Europe also elected its board members for a new four-year mandate. The EACB extends congratulations to Ms Isabelle Ferrand, Deputy Director of Confédération Nationale du Crédit Mutuel, who has been newly elected and will represent the EACB on the Board in the future. We are certain that Ms Ferrand presence on the Board will greatly strengthen the ties among the two organisations.

At the same time, Mr Etienne Pflimlin, former President of Confédération Nationale du Crédit Mutuel and co-founder of Cooperatives Europe, stepped down as a board member. He represented the EACB on the Board of Cooperatives Europe and in the International Cooperative Alliance. Mr Pflimlin served as Vice-President and thereafter as President from 2002 to 2006. Nina Schindler emphasises that the EACB owes a depth of gratitude to Mr. Pflimlin for his longstanding commitment and passionate engagement to the promotion of cooperative banking and cooperative business model in general.