Co-operative Banks Exchange with High-Level Speakers on the Topics of Digital Euro, Banking Union and Sustainability During the EACB 46th General Asse 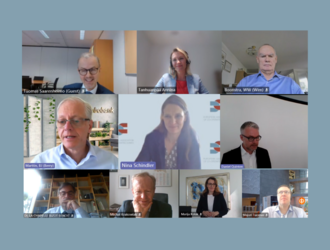 The meeting with Mr. Saarenheimo allowed for a first-hand account of the negotiations and discussions at Eurogroup level on topics of key relevance for the EU and to exchange key EACB messages on the strengthening of the Banking Union and the Euro as a digital currency.

“Looking at the Eurogroup’s work on a digital Euro, the impact that a digital Euro would have on credit institutions and the broader ecosystem is one of the priorities, there is no intention to foster disintermediation; also the stability of financial institutions is a key concern. In our reflections, the introduction of a digital Euro to the broad public would certainly be a task for the banking sector”, stated Mr. Saarenheimo. On the topic of the Banking Union, he declared: “The work on the Banking Union has made considerable progress. This led to the plan for a targeted reform of the crisis management framework and the relevant interactions with national Deposit Guarantee Schemes. The intention is not to overhaul the BRRD framework but introduce some necessary adjustments. Especially for the public interest assessment, the use of DGSs and the link with the Single Resolution Fund, and aspects relevant under State Aid Rules, making resolution a practical solution for a wider set of cases. This should not mean that very small banks that only refinance with deposits should have to issue more bailinable debt. The Eurogroup is also well aware of the presence and importance of solidarity mechanisms like institutional protection schemes. Overall, the objective is to ensure a more effective and predictable crisis management framework ».

Berry Martin, EACB President, underlined that “Members of the EACB General Assembly were very honoured to engage with Mr. Saarenheimo today, in particular on the developments related to the completion of the Banking Union and the reflections around the digital Euro which are crucial for co-operative banks due to their specificities. Co-operative banks have specific organisational and structural features that need proper recognition in the resolution planning context, such as solidarity mechanisms like cross-guarantees and institutional protection schemes, democratic governance, inverted ownership pyramid”.

Wim Boonstra, Special Economic Adviser at Rabobank and endowed professor in Monetary and Economic Policy at the Vrije Universiteit of Amsterdam, shared his expertise on the Digital Euro and its risk and opportunities for co-operative banks. During his intervention he declared: “The introduction of a digital euro, issued by the central bank, will fundamentally change the banking landscape. If well-designed, as an addition to the existing financial system, it may contribute to a stronger and more competitive banking landscape. However, a wrongly designed Central Bank Digital Currency (CBDC) may undermine financial stability and disintermediate the existing banks. It is important to address these topics, before decisions are being made on technical issues”.

Finally, during the meeting, members of the EACB General Assembly elected Mr. Benoît de La Chapelle-Bizot from BPCE Group and re-elected Mr. Holger Mielk from BVR as EACB Internal Auditors for a term of two years.