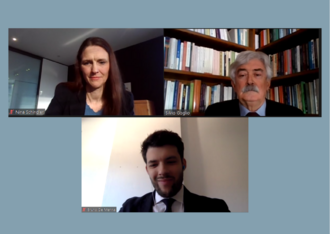 The winners of the 9th EACB Award for young researchers received their price during a ceremony as part of the EACB Webinar Apropos Coop Banking "The Future of the Co-operative Business Model" held on the 24th of January 2022. After a laudatio by Prof. Silvio Goglio, Chair of the Scientific Jury, the 1st Prize winner, Bruno de Menna, presented the findings of his paper on the influence of relationship lending on co-operative banks’ performance.

In June 2021, the Award’ Scientific Jury presented the results of their assessment and announced the winners of the 9th edition. With this prize, the EACB aims to attract young talents to investigate co-operative banks’ specificities and thus stimulate research on co-operative banking.

“The award had a harvest rich from a qualitative point of view two of them outperforming many of the submissions received previously; if they were not in the same year, we could easily have seen them both winning the award.”, outlined Prof. Silvio Goglio, Chair of the Jury, in his laudatio. For this reason, the Scientific Jury suggested granting, as an exception, a prize also to the runner-up.

After careful selection and according to the criteria established in the Call for Papers, the Jury proclaimed as winner of the 1st price Mr. Bruno De Menna, from the University of Toulouse Institut d’Études Politiques, Department of Economics (LEREPS), for his paper « Monetary policy, credit risk, and profitability: The influence of relationship lending on cooperative banks’ performance ».

According to the Jury, the topic of the paper is highly relevant and applies some existing research and methods to the particular field of co-operative banks.

The study investigates the effects of monetary easing on bank credit risk and profitability in 10 countries of the euro area between 2010 and 2019. In particular, it analyses how such effects depend on bank ownership structures and, for co-operative banks, how they interact with relationship lending practices. Building on previous studies indicating that credit risk and profitability are jointly determined, Mr De Menna considers a simultaneous equations system to examine how relationship lending employed by co-operative banks influences their performance in a low interest rate environment. Additional insight is produced by deriving results for co-operative banks and comparing the results with other banks. Therefore, the paper also contributes to the diversity debate in banking regulation and monetary policy.

For her remarkable research “Funding liquidity risk and financial stability: evidence from cooperative banks », Ms Erika Baraglia, Department of Management and Law of the University of Rome “Tor Vergata”, was awarded the Special Price of the CEO.