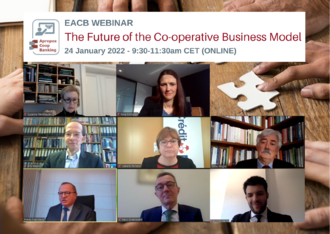 To mark the launch of two new EACB operational bodies - the Co-operative Identity Forum and the Academic Advisory Group - the EACB hosted a webinar on “The Future of the Co-operative Business Model” gathering high-level speakers from the co-operative world and the academic community. On this occasion, winners of the 9th EACB Award for Young Researchers on Co-operative Banks were honoured.

The event focused on the prospects for the co-operative business model and the challenges for the co-operative identity, particularly in light of the trends emerging from the increasing digitalisation and the ecological transition of our economies.
In this context, Nina Schindler, EACB CEO, leading through the programme, stressed the relevance of co-operatives for the economy and the need for specific co-operative perspectives to be well recognised and considered by politicians, regulators and legislators.

The keynote speaker, Susanne Westhausen, President of Co-operatives Europe, pointed out that in many countries the co-operative model would become a “forgotten way” to do business and that the co-operative identity would require more promotion. Nevertheless, with an optimistic eye to the future of co-operatives, she said: “In times of trouble people get together to reach for solutions to meet their common needs and aspirations through jointly owned and democratically controlled enterprises, such as co-operatives.”

In the subsequent panel discussion, representatives from the co-operative banking sector and academics addressed the current trends in banking from their perspective. The panelists made clear that co-operatives have a fundamental role to play with respect to the sustainable transition and that the climate imperative should remain the thesis of the co-operative model. Furthermore, it would be key to maintain the proximity to customers and local presence while seizing the opportunity to be on top of digital evolution not missing the digitalisation train. The current time of transformation is the time of opportunity for co-operatives.

In the presence of the participants, the EACB also awarded the prize to the winners of the 9th EACB competition for young researchers on co-operative banks. The Chair of the scientific jury, Professor Silvio Goglio, gave the laudatio of the winning paper “Monetary policy, credit risk, and profitability: influence of relationship lending on co-operative banks" performance” by Bruno De Menna. Erika Baraglia received the Special Prize of the CEO for her research on “Funding liquidity risk and financial stability: evidence from cooperative banks”.