Cooperative banks: The strength of impact factors on the cooperative value orientation and their effects on the behavior of cooperative members 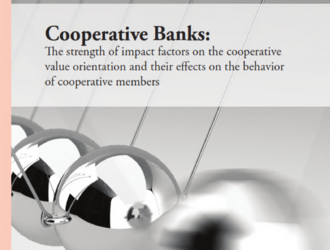 Ryan van Hout is a Risk Advisor at Rabobank Netherlands, in the Recovery and Resolution expertise area. In addition to Rabobank, Van Hout is active as a commissioner at Noorderkwartier N.V., an organisation providing social employment, as well as the MEE & De Wering foundation, a social services and client support organisation.

This empirical research aims to gain knowledge regarding factors that influence the behavior of members. This consists of financial behavior (such as purchasing more products/services from the bank) as well as non-financial behavior (such as participating in cooperative activities). In the academic research reported here the local cooperative banks from the Netherlands and Germany are compared with one another regarding their value  orientation. This has not been found in other academic research. The ‘extra’ of the cooperative bank, compared to commercial banks, is the cooperative value orientation. Three parties (the members, the Board of Directors and the Supervisory Board) each have their own value orientation that influences the behavior of each other towards the cooperative bank. The reasons behind the differences in the value orientation are subsequently explained. For this research, a new conceptual model has been developed (the conceptual model is a diagram depicting all the concepts to be studied, as well as the relationships that can be determined between these concepts).[...]

The full summary can be downloaded by clicking on the link below the side picture.