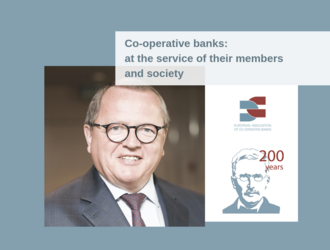 Cera’s roots go back to 1892, when the first Raiffeisenkas was set up in Rillaar by Jacob Ferdinand Mellaerts (1845-1925). Back then, the organisation’s articles of association were by and large a translation of those published earlier by Friedrich Wilhelm Raiffeisen (1818 - 1888). In this manner, Cera became an important link in spreading the Raiffeisen concept outside Germany.
What began as a small, local savings guild would grow to become one of the biggest financial institutions in Belgium. More precisely, from an agricultural savings and credit institution, Cera developed into a general bank with activities in retail, SMEs, the corporate sector and community services. It provided a full range of banking products and services, including mortgage loans, savings, payments, investment funds, asset management and corporate finance.
In 1998, Cera’s banking activities were incorporated into KBC, a newly-established integrated banking and insurance group. On that occasion, the federation of 207 local banks with a co-operative structure were absorbed by Cera Head Office. All members of these local banks then became direct members of Cera, thereby establishing one single strong co-operative. Also, through this transaction Cera became a major shareholder of KBC.
Today, Cera and its subsidiary KBC Ancora are the largest shareholders of KBC Group, together owning 21.2% of KBC. KBC is a bancassurer with 5 core markets, 1,600 bank branches, more than 40,000 employees and holds approximately €275 billion in total assets.

Together with around 400,000 members, Cera invests in communities and works to build a strong co-operative. By joining forces with its members and partners, Cera generates economic and social added value in three areas:
- As a principal shareholder, Cera ensures a solid base for KBC Group;
- Cera generates a positive impact in our communities;
- Members of Cera qualify for unique benefits.
Raiffeisen’s values of co-operation, solidarity and respect for all have been underpinning Cera’s entrepreneurial approach for 125 years now.
With its baseline of ‘Cera. Deep roots, broad presence’, the co-operative emphasises its rich history and strong base as well as its wide-ranging and diverse activities in the financial, economic, social and societal spheres.

Cera has around 400,000 members, with each one investing a minimum of €1,250 (25 shares of €50) and a maximum of €5,000 (100 shares of €50) in the company.
The Management Board has 20 members, 14 of whom are elected from the membership base. The chairman and the two vice-chairmen of the Management Board are elected from among these 14 members. There are six other directors, including two managing directors, three external directors who have been appointed for their specific, complementary expertise and one director who is also a member of the management committee. The majority of these directors are also members.

The multi-stage representative structure is as follows:

Members and their representatives who are members of the Regional and National Advisory Councils also regularly participate in steering and sounding-board groups and other consultative bodies. Members are regularly informed about what’s going on at Cera via the CeraScope and CeraSelect magazines, e-zines and also messages published on the website. This ensures good top-down, as well as bottom-up information flows. As such, consultation and participation are firmly established within the structures and operation of the co-operative group.

The zeitgeist is beneficial for organisations like Cera, since the co-operative is helping to create a more sustainable society with its values of co-operation, solidarity and mutual respect.Continuous awareness of the need to broaden and rejuvenate the membership base is an essential condition for ensuring a dynamic co-operative structure over the longer term. An extensive membership base gives Cera legitimacy and the strength to fulfil its role in the economy and society in general.
To start with, there is the contribution made towards developing the strategy of KBC and the bancassurer’s supervision. Together with the other stable shareholders, Cera supports KBC in its role as a benchmark bancassurer and also in having a positive influence on society.
Involvement and the active engagement of members must also be given a contemporary and future-oriented interpretation. Direct human contact – such as with the operation of the advisory councils or taking part in member benefit activities – will go hand in hand with the use of new media and communications technology.
In the future, members will also be able to benefit from attractive and wide-ranging discounts on products and services. After all, the power of collective purchasing has traditionally been one of the great advantages enjoyed by co-operatives such as Cera. These discounts have proven to be a very tangible and appreciated benefit among Cera members. Moreover, Cera also endeavours to distribute an attractive annual dividend as financial compensation in return for members’ investments.
By way of periodical strategic reflection and on-going consultations with all stakeholders, Cera keeps its finger on the pulse with respect to social developments. With the support of the membership base and the efforts of many volunteers, Cera will continue to initiate, support and supervise social projects over the forthcoming period. This is carried out at local, national or international levels in the following areas: