3 questions to Hervé Guider, General Manager of the EACB 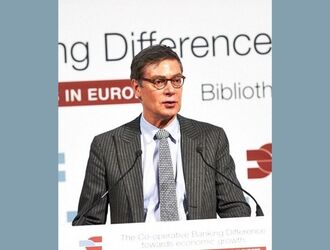 Dear Mr Guider, this end of year is special for the Association as after 30 year working for co-operative banks and the EACB you will retire beginning of 2021. What are the most significant events that have marked this unique journey at the service of co-operative banks?

Indeed, it is a singular event that made me look back on these thirty years spent in Brussels. I had the chance to be in the front row and to take part in the great European project where I stood. This citizen and professional experience is unique. I came from a regional co-operative bank established in the Landes region in the south-west of France and I was sent to Brussels in the middle of negotiating the Single Act and the first directives for the coordination of banking legislation, which are the foundations of today's banking market. The Basel 1 agreement did not yet exist. It was also the first action taken by the EACB to the European regulator for the recognition of the specific features of the co-operative banking business model.

Similarly, at the beginning of the financial year 2000, it was decided that all publicly traded Community companies had to prepare their consolidated financial statements on the basis of a single set of accounting standards, namely the International Accounting Standards (IAS). We have therefore engaged in intense and uncertain exchanges with the IAS Board in London to have co-operative shares recognised as capital instruments in IAS 32. We successfully achieved it and all co-operative banks in Europe and beyond benefited from this especially useful measure a few years later in the discussions on the definition of equity capital in the framework of Basel 3.

Closer to the present time, I could mention the regulatory framework linked to the Banking Union. A project that has been mobilising the EACB for the recognition of the specific characteristics of co-operative banks. It has been a continuum for 30 years!

Thirty years later, what achievements are you most proud of?

I have just mentioned some successes for the benefit of co-operative banks. Personally, I have lived rich experiences. For example, the preparatory work for the introduction of the euro is certainly one of the strongest experiences. The changeover to the single currency was historic and it was a privilege to take part in this endeavour in the committees set up by the European Commission and the European Monetary Institute.

The enlargement of the European Union to the countries of Central and Eastern Europe was also a wonderful opportunity for me. It was the rebirth of co-operative banks in these countries and to do so it was imperative to have an appropriate national legislative framework. So together with the leaders of these co-operative banks, I took part in drafting the legislative projects authorising co-operative banks in these countries. Almost 20 years later, I am happy to see that co-operative banks, as in Poland, have become fully-fledged banks and are actively involved in financing the local economy. Moreover, the opening of the EACB to members from non EU jurisdictions in recent years was a crucial step in bringing the debate to international standardisation bodies such as the Basel Committee. I am pleased that our Canadian, Japanese and more recently South Korean members have also found in the EACB their voice and support in the negotiations with their national authorities. All in all the collaboration with and between our 28 Members has been outstanding.

What do you wish for the future of the EACB?

The EACB is today an association that relies on a team of top professionals in Brussels. Their expertise is unanimously recognized by our stakeholders. They are women and men who are committed and involved in convincing the legislator that diversity is not an obstacle to the single banking market. Diversity helps to reduce the systemic risk while being positive for the consumer by promoting competition. The EACB can also rely on a strong governance model that has been strengthened and refined over the last few years. Successive presidents have ensured and worked to make sure that all actions and positions taken are in the general interest of co-operative banks whatever the country, whatever the size of the institution.This mix between competence and cohesion is the force and an asset of the EACB today and undoubtedly for the years to come.

Moreover, I have to underline the constructive dialogue undertaken during those many years with regulators, supervisors and policy makers. I wish the same success for the EACB and the same open and necessary dialogue in view of the challenges ahead.