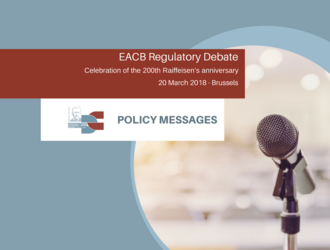 Brussels, 20 March 2018 -  Leaders of co-operative banks and EU authorities met today in Brussels at the Regulatory Debate organized by the EACB (European Association of Co-operative Banks) to discuss the developments in prudential regulation, the capital markets union and the review of the resolution framework, among others. The event took place in the context of the celebrations of the 200th Anniversary of Raiffeisen, one of the pioneers of the co-operative movement.

The EU regulatory framework: where do we stand ?

The consequences of the crisis and the responses of policy makers led to a massive overhaul of the regulatory landscape. The financial system is today more stable and its institutions more solid than 10 years ago. Despite the development of wide supervisory and resolution toolboxes and the build up of high quality capital and liquidity buffers, the regulatory wave has not seen a halt. It rather seems that regulation has become an objective and a purpose per se, without considering the cumulated impact of different reforms and the way those interact and interlink.
Instead, we take the occasion to stress again that proportionality should be considered across various dimensions: i.e. suitability of measures (the ability to address the risk), subsidiarity and necessity (meaning a lack of a viable alternative instrument), proportionality strictu sensu (meaning that the benefits should outweigh the costs).

The complexity of regulation and the problem of Perpetuum Mobile:

Regulation is increasingly seen as a success by the simple fact that it is finalised. This is also due to the increased number of regulatory products/topics that now go from Basel standards, to the EU level 1 legislation, to regulatory and implementing technical standards, EBA guidelines and supervisors’ guidelines/guidance or expectations.
This leads to an ever more intricate regulatory framework for which it becomes increasingly difficult to evaluate consequences and interactions and where especially guideline products are finalised within very short timeframes and without a clear evaluation of the impacts.

Diversity: why is it important?

Diversity remains an insurance against systemic risk and an essential element for increased resilience of the financial sector. In this context co-operative banks have always played a role of stability anchor, particularly for the continued financing of the real economy and for the smooth functioning of liquidity and funding markets.

What has already been achieved?

In this context we would highlight that co-operative specificities have been recognised in many instances, co-operative shares fully qualify as CET1 capital in the Basel framework, in the CRR and in EBA delegated acts with dedicated provisions ruling their redemption mechanisms; the various solidarity mechanisms (IPSs, groups, cross guarantee systems) are consistently taken into account from a prudential and supervisory standpoint; the specificities of co-operative liquidity systems are reflected in the EU LCR framework and in the Basel liquidity framework.

What still need to be addressed ?

This should not, however, induce complacency when looking at the challenges ahead especially as the regulatory framework undergoes continued revision:

- Cooperative groups should be able to fulfil MREL/TLAC requirements as one without a need to pre-position internal MREL, as the existing solidarity mechanisms already play an insurance role which is even wider than the loss absorption that could be provided by internal MREL/TLAC.

- The MREL should be appropriately calibrated, i.e. banks that would be liquidated under normal insolvency proceedings should only satisfy the loss absorption amount.
- Reporting obligations should be in line with the complexity of the institution and its actual MREL requirement.

The finalisation of the Basel reforms:

The finalisation of the Basel III reforms in December 2017 produced a new major source of pressure for the banking sector. Particularly, the revisions to the credit risk approaches (both standardised and internal models) will have important consequences for a bank relying financial system like the EU one. What is striking is that capital requirements for loans with demonstrated low risk and strong collateral are increasing.

Why is this an issue for co-operative banks ?

It is paramount in this context that the implementation avoids negative consequences and disruptions for EU economy. It is essential to reflect specific market characteristics (e.g. mortgages, equity holdings) that are peculiar to EU Member States, and to leverage on the good work being done by EU supervisors (EBA and the SSM) to restore trust and reliance in internal models.

The dialogue with supervisory and resolution authorities: need for adaptation?

The continued exchange with supervisors and resolution authorities is an essential element for an effective and tailor made supervisory and resolution action. Only a close understanding of institutions’ specificities allows an effective targeting of potential issues before those erupt with negative consequences.
This however requires that the supervisory approach and requests are tailored to the complexity, risk and size of institutions. The SREP framework should be carefully adjusted and calibrated. And the same applies to the recovery and resolution obligations, for which not enough has been achieved yet.
Similarly, the approach to the resolution strategy should be flexible and reflective of specific institutional arrangements.

A regulatory framework that takes the diversity of the European banking landscape sufficiently into account also promotes competition, innovation and productivity. It also supports the provision of a wider range of banking products for customers, helping to preserve the diversity, and thus the stability, of the financial system.