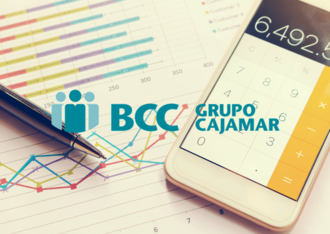 •    The new financing in strategic sectors grew by 11.2%, mainly in the agro-food sector and in small and medium-sized enterprises.

•    The Group created a provision of 200 million euros, which is the maximum amount estimated that it will have to face if the reimbursement of sums from mortgage operations made with consumers is applied retroactively, including those affected by the Supreme Court's Ruling.

•    The gross income registered a good performance with a year-on-year growth of 6.6%.

•    The NPL ratio has improved by 2.47 points, thanks to a drop of 974 million euros in doubtful assets from credit investment, due to the sale of the non performing and written off loan portfolios, recording an 18.8% reduction.

Grupo Cooperativo Cajamar has obtained a profit of 76.1 million euros, 8.4% higher than the previous year, thanks to the increase of gross income by 6.6%, up to 1,013.4 million euros; a growth of 2.8% of net interest income excluded from the carry-trade, despite the scenario of minimum interest rates; and the credit weakness. Commissions arising from the disintermediation of investment funds, pension plans and consumer operations have grown by 22.85% and have become the main source of the gross income's growth.

The control of operating costs, resulting from the containment of personnel expenses and the optimisation of the branch office network, has contributed to improving efficiency by 3.49 percentage points, up to 62.2%, as well as increasing profitability, raising the ROE up to 2.65%.

In addition, the global requirements of writedowns and other provisions have been reduced by 72.1% with respect to the previous year, that is, from 230.7 million registered in 2015 to the 64.3 million of writedowns from impairment losses on financial assets in 2016. Furthermore, out of the 239 million euros provision created last year, 200 million were used to cover the contingency of having to reimburse the total amount for the claúsula suelo (mortgage floor clauses), although Cajamar already withdrew this clause in 2013 following the Supreme Court's Ruling. The Group currently estimates that the final impact will be remarkably lower than the amount provisioned, attending mainly to the principle of res judicata.

Grupo Cajamar has reduced the non-performing loans ratio by 2.47 percentage points down to 13.44%, considerably reducing non-performing loans ratio in developers by 3.6 percentage points, and by 0.9 percentage points in ex- developers. The irregular assets have also dropped by 1,151 million euros, mainly due to a reduction of doubtful assets in the amount of 974 million euros, which is 18.8% less than registered at the end of the previous year. Specifically, it dropped thanks to the sale of portfolios in the second and fourth quarter of 2016 and to the improvement in the commercial management of foreclosed assets.

Similarly, Grupo Cajamar maintains a comfortable liquidity position, with maturities covered over the next years, free access to markets, an issue of subordinated debt of 100 million in November and large volumes of securities discountable at the ECB. This allows for a comfortable fulfillment of the liquidity ratios, placing the Liquidity Coverage Ratio (LCR) at 651.88% and the Net Stable Financing Ratio (NSFR) at 115.54%.

Growth of the strategic business

The granting of new credit to strategic sectors grew by 11.2% in 2016, mainly in the agro-food sector and in small and medium-sized enterprises. This helped the Group maintain its leadership in the agro-food sector, consolidating a market share of around 13% in spite of an increased competition in the financial sector, thanks to its wide offer of products and services and to the expert knowledge of the agro-food companies' needs.

In addition, the Group does a very important job in transferring the know-how from the research work it carries out in its two experimental agronomic centres, which received 4,000 visitors throughout the year. During 2016, it organised over 149 activities, consisting of seminars, professional conferences and courses in 21 provinces, with 10,000 attendees.

In 2016 the Group has continued to relevantly contribute to the development of the economic and social environment by increasing the support to SMEs with new comprehensive tailor-made products, such as Soluciones 360 SMEs, and value-added services, with the launch of Plataforma Internacional to collaborate in the international development of Spanish companies by providing access to a network of specialised business partners.

The Group has 1,191 branches in 42 provinces and 2 autonomous cities, extending its presence in the last year to the cities of Mérida (Badajoz), Úbeda (Jaén), Alcázar de San Juan y Tomelloso (Ciudad Real), Olot (Girona), Osuna (Seville) and Port d´Alcudia (Majorca). All this has helped increase its market share in both credit and deposit, reaching in Spain 2.59% and 2.18%, respectively.

The total on-balance sheet assets amounted to 39,166 million euros and the managed business volume reached 67,049 million euros, thanks to the rise of off-balance-sheet funds by 24.3%, that is, investment funds, savings policies and pension plans. This rise was maintained mainly by the high contracting of investment funds and savings policies, 48.9% and 32.3% more when compared with the previous year, respectively.

The 4 million customers of Grupo Cooperativo Cajamar have stated an above-average level of satisfaction in the service provided. According to Stiga's findings from a survey conducted in 2016 among customers and non-customers of the Group, the customers value the institution's customer knowledge, approachable nature, transparency displayed when dealing with them and quality of the service. 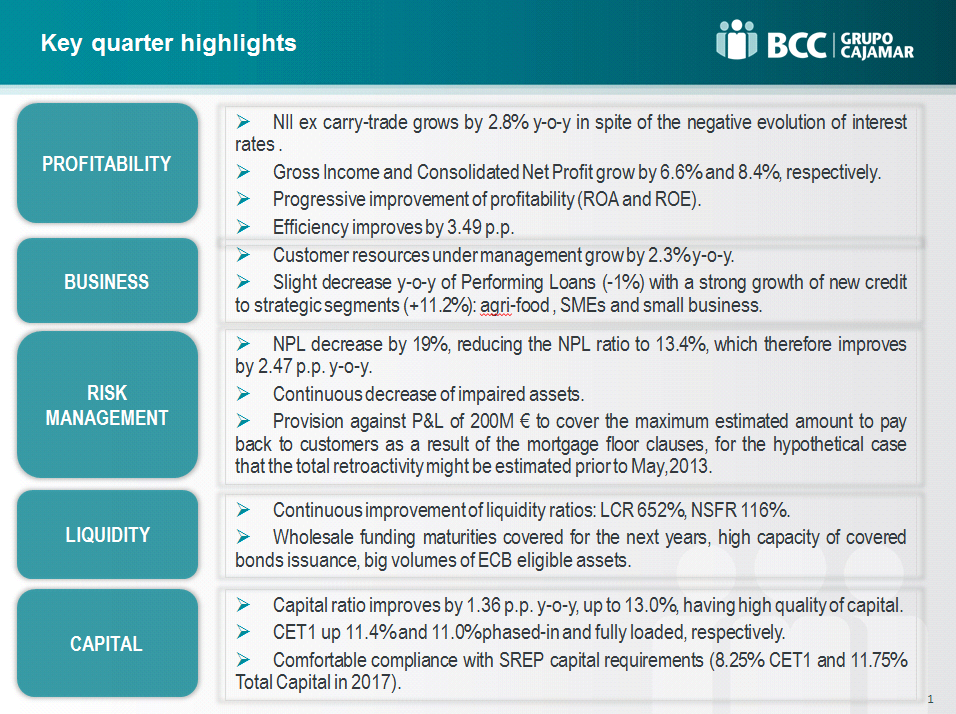