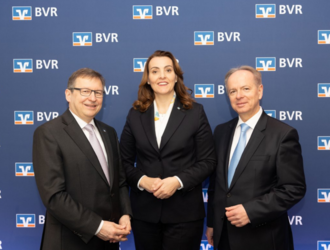 German Cooperative banks generate a healthy profit before taxes of €6.4 billion and further expand their market share in the customer business

Yesterday, Tuesday 12th of March, the executive board of BVR presented the German co-operative banks' figures for 2018.

The German local cooperative banks, Sparda banks, PSD banks, and cooperative specialized institutions achieved a profit before taxes of €6.4 billion in 2018 thanks to steady net interest income and an increase in net fee and commission income. The year under review saw gains in market share in the lending and deposit-taking business, the growth of cooperative network business with the entities in the Cooperative Financial Network, and capital expenditure on digitalization. The number of banks fell by 40 to 875 as a result of mergers.

“We are forging ahead with our digitalization initiative on the basis of the decentralized business models of our independent regional cooperative banks. And we are capable of investing heavily for the future without detracting from our operational earnings power,” said Marija Kolak, President of the Bundesverband der Deutschen Volksbanken und Raiffeisenbanken (BVR) [National Association of German Cooperative Banks].

Looking ahead to the industrial policy debate at the upcoming EU summit on March 21 and 22, Kolak gave her backing to German Chancellor Angela Merkel’s plans for strengthening innovation in Europe through joint European initiatives in areas such as infrastructure and through the expansion of digital networks. “But it is also important to set clear boundaries for industrial policy. The state is not the better industrialist, and it is not the state’s job to create national or European champions. These emerge through competition as a result of good business decisions,” explained Kolak.

The increased volumes in the interest-rate business and agency and brokerage business had a positive impact at operational level. Net interest income was up slightly, rising by 0.6 percent to €16.6 billion. As a percentage of average total assets, the interest margin declined by 0.08 percentage points to 1.82 percent against a backdrop of low interest rates. Net fee and commission income increased by 6.6 percent to €5.3 billion. Despite rigorous management of costs, administrative expenses advanced by 1.8 percent to €14.6 billion. This total included higher staff expenses resulting from the collectively agreed pay rises that came into effect in August 2018. However, other administrative expenses also went up, increasing by 3.4 percent to €6 billion. This was attributable to capital expenditure on the digitalization initiative as well as additional costs in connection with migration of the IT process for banking. The cost/income ratio dropped slightly, by 0.1 percentage points, to 67.0 percent.

Operating profit before gains and losses on valuation amounted to €7.6 billion – or 0.83 percent of average total assets – in 2018. Profit before taxes decreased to €6.4 billion on the back of write-downs on securities resulting from increased market volatility at the end of the year and due to the recognition of allowances for general banking risks in respect of fair value gains and losses. Income taxes came to €1.9 billion, compared with €2.2 billion in 2017. The cooperative banks transferred a total of €2.3 billion to the fund for general banking risks in 2018, thereby further strengthening their already sound capital adequacy. Their net income for the year after taxes is therefore expected to be €2.2 billion.

As at December 31, 2018, the German cooperative banks had increased their equity by a substantial 4.0 percent to €52.4 billion and thus improved their regulatory capital adequacy: Their own funds pursuant to the Capital Requirements Regulation (CRR) rose by 4.7 percent to €90.6 billion. Tier 1 capital advanced by 6.8 percent to €77.9 billion and the Tier 1 capital ratio climbed by 0.15 percentage points to 15.0 percent. The total capital ratio stood at 17.5 percent as at December 31, 2018 and was therefore well above the minimum threshold stipulated by the regulator, as had also been the case at previous reporting dates.

The primary institutions continued to increase their membership numbers during the year under review, underlining the strong loyalty shown to the cooperative banks. At the end of 2018, their membership base consisted of 18.6 million people and companies. This constitutes a year-on-year rise of 45,000 members.