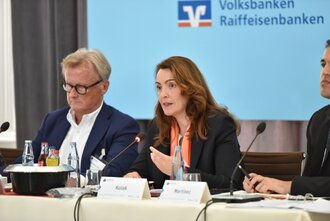 Ahead of the presentation of the Charlemagne Prize to Emmanuel Macron, BVR President Kolak says that decentralization strengthens Europe

At the Europa Forum in Aachen on the day before the International Charlemagne Prize is awarded to the President of France Emmanuel Macron, the President of the National Association of German Cooperative Banks (BVR) Marija Kolak called for a return to more discussion about Europe.

Referring both to the general economic perspective and to the perspective of the Volksbanken Raiffeisenbanken Cooperative Financial Network, Kolak explained that decentralization is also vital to a successful Europe: “Subsidiarity and decentralization are defining principles for the success of Europe’s economic and monetary union. I firmly believe that Europe is stronger when member states are able to learn from their neighbors.” To illustrate her point, Kolak cited the Scandinavian approaches to e-government and Germany’s dual vocational training system.

Another success factor, according to Kolak, is the interplay between risk and responsibility. “There is still a lot to be done in Europe, particularly in terms of national risks. It is still important that the banks are not able to escape their liabilities and that the member states of the European Union are not released from their responsibility to implement reforms.” Kolak explained that before there can be talk of centralizing deposit insurance in Europe, for example, standardized insolvency law needs to be established and the dangerously high volume of non-performing loans in Europe needs to be reduced. “I am certain that the liability principle provides good incentives and ultimately strengthens European cohesion,” she stated.

The German local cooperative banks’ long-standing sponsorship of the International Charlemagne Prize of Aachen – awarded on Ascension Day – underlines their clear commitment to the European Union as a guarantor not only of peace, democracy, and the rule of law but also living standards and the economic strength created by the single market.