Crédit Mutuel group results for 2019: A historic performance which confirms the relevance of the model 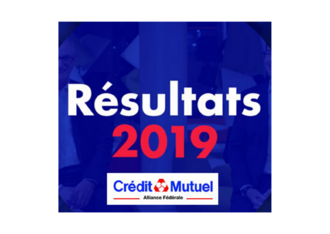 The year 2019 once again demonstrates the performance of the Crédit Mutuel group: the dynamism of the commercial activity and the operational efficiency allow the total net profit to reach a historic level of € 3,858 M (+ 7.8%) - of which € 3,775 million group share (+ 7.7%).
Putting these results in reserve for investment and development once again confirms the group's financial solidity with a CET1 solvency ratio of 18.2%, among the highest of French banks.

The key to this success: the commitment of 83,000 group employees, the support of nearly 22,000 elected officials, in the service of an acclaimed customer relationship combining the best of local banking and the latest technological developments, with a diversified offer that is always more efficient in the group's networks, in France and neighboring countries.

The group and its subsidiaries thus gained +1.6 million customers in 2019, bringing their number to 34.2 million, including 9.1 million abroad.

This general performance is also that of the strength of Crédit Mutuel's identity and its choice of a model that is always focused on its core business, retail banking, insurance and services. It is also the success of a decentralized decision-making model which combines the strength of a group and the ability to adapt to the expectations of the regions.

Pierre-Edouard Batard is also one of the two EACB Vice-Presidents.