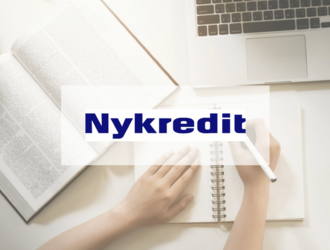 The Nykredit Group delivered a positive and highly satisfactory financial performance in 2017 driven by good customer activity, high investment portfolio income and positive macroeconomic trends, which led to, for example, low as well as reversed impairments for loans and advances. Furthermore, the Group received one-off income from the settlement of two large housing cooperative exposures, the divestment of the activities of Nybolig Erhverv, a commercial estate agency business, and the last of the Group's headquarters buildings. This was offset by Nykredit's recognition of the estimated impact of new principles for impairment of mortgage lending (expected credit losses, cf IFRS 9), reducing the Group's profit. All in all, this year Nykredit delivered its strongest financial performance ever.

Activity levels in business banking and Nykredit Markets were high, and growth in the customer base and business volumes was satisfactory.

The Totalkredit alliance also continued to grow stronger, and Totalkredit lending rose by DKK 39bn in 2017 to DKK 630bn in nominal terms at end-2017.

2017 was significantly affected by positive value adjustment of interest rate swaps of DKK 325m, driven by the positive effect of both interest rates and credit spreads.

Going forward, Nykredit will continue to apply the same basic principles for mortgage loan impairment, which after implementation of IFRS 9 in 2018 will apply to lending at amortised cost. Management has decided to recognise the impact of about DKK 1.0bn on mortgage lending in the Financial Statements for 2017. Reference is made to note 52.

In addition, significant reversals of impairment provisions were made, as impairments from previous years partly relating to two large housing cooperative exposures were reversed in Q2, and as impairment levels were generally low in 2017. The low impairment level was driven by particularly positive trends in most of Nykredit's customer segments at the same time. For the coming year, partly normalised and thus higher impairment levels than in 2017 are expected.

Legacy derivatives, which are excluded from business profit, saw a positive change of DKK 2.3bn. This should be seen in the context of a one-off gain from recoveries of losses previously written off on swap transactions with the above-mentioned two large housing cooperatives as well as the positive effect of both interest rates and credit spreads.

The Nykredit Group's profit before tax thus rose from DKK 6.7bn in 2016 to DKK 10.1bn in 2017. Of total earnings growth of DKK 3.4bn, DKK 1.0bn was attributable to the settlement of two large housing cooperative exposures, where the trustee's sale of properties generated one-off income in the form of reversed loan impairment of DKK 0.3bn and recovery of losses on swap transactions of DKK 0.7bn.