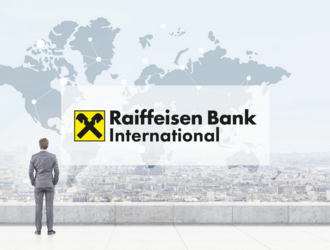 All figures are based on International Financial Reporting Standards (IFRS).

“We are very satisfied with the past financial year. We have achieved one of the best results in our company's history and at the same time successfully completed important projects such as the merger with RZB,” said Johann Strobl, CEO of RBI.

Therefore, it will be proposed that the Annual General Meeting approve a dividend of € 0.62 per share. This would correspond to a maximum dividend payout of € 204 million and a payout ratio of 18 per cent.

“We are pleased to be able to pay dividends again and propose a dividend of 62 cents per share for 2017. We aim to achieve a payout ratio of between 20 and 50 per cent,” Strobl said.

Despite effects from currency appreciation, the Group’s general administrative expenses fell 1 per cent year-on-year, or € 37 million, to € 3,104 million. In particular, the average exchange rate of the Russian rouble appreciated 12 per cent year-on-year. The cost/income ratio improved 2.1 percentage points to 59.4 per cent also due to higher operating income.

The NPL ratio declined 3.0 percentage points year-on-year to 5.7 per cent.

Comparison of results with the previous quarter

At € 813 million, general administrative expenses in the fourth quarter were up 13 per cent, or € 95 million, from € 718 million in the previous quarter.

Compared to the third quarter, net provisioning for impairment losses was up € 43 million to € 127 million. This was mainly attributable to an increase in individual loan loss provisions due to one large individual case in the corporate customer business at RBI AG.

The consolidated profit in the fourth quarter was € 206 million, which is a decrease of € 116 million compared to the third quarter 2017.

“We have a lot of plans for this year, too. We want to grow in selected countries and continue RBI‘s digital transformation. Last year, we launched Elevator Lab, the largest Fintech Accelerator program in CEE. In May, we will start the second round,“ Strobl said.

RBI will pursue loan growth with an average yearly percentage increase in the mid-single digit area.

RBI anticipates that the NPL ratio will further reduce in the medium term.

The bank aims to achieve a cost/income ratio of below 55 per cent in the medium term.

RBI targets a consolidated return on equity of approximately 11 per cent in the medium term.

The bank targets a CET1 ratio (fully loaded) of around 13 per cent post dividend in the medium term.

Based on this target, RBI intends to distribute between 20 and 50 per cent (dividend payout ratio) of the consolidated profit.

The targets in this outlook include the impact from IFRS 9 and FINREP.